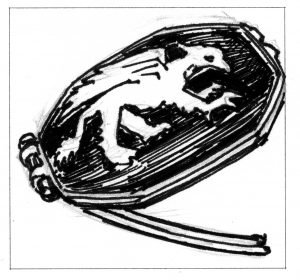 The Fantasy Worlds of Kenneth Rath

When her father changes jobs, ten-year-old Cassie Argyle’s family is forced to move to a new house, in a new town and a new state.  Everything feels strange and different, the neighborhood, the people, but most especially the old house with its odd, built-in bed and weird, unidentifiable noises.  Though at first it seems these are just the usual curiosities that accompany such places, it soon becomes clear that the strangeness runs much deeper.  For one day, seemingly by chance, Cassie pulls out the drawer beneath her bed to retrieve a lost toy and discovers a hidden passage leading to a secret room.  In that room is a locked wooden door leading to where there should be nothing but dirt and lawn.  But there is no key.

Summer passes, and Cassie begins to make friends.  She meets Magdalena Hernandez, a bubbly, outgoing girl who shares her love of stories and art, and Liz Trumble, quiet and troubled but brave and loyal.  As she becomes more comfortable with them, she tells them of her secret, and is surprised to learn that Liz has found the key to the door, stumbling across it some time ago, long before Cassie moved to town.

Together, the three open the door.  Behind it is not some hidden closet or even a secret tunnel, but a place completely outside possibility, an enormous hallway stretching as far as the eye can see, lined with innumerable doors.  And behind each door is a different place, a different world.  Some are wondrous and beautiful, but others are terrifying and dangerous.  Some are almost like their own Earth, others are astonishingly different.

Tentatively, they begin to explore.  They see many wonders and meet new friends, such as Ok-pik-pik-qilk-tri, a nightmarish-looking creature with bat wings and multiple eyes whom they rescue from a world destroyed by war, and Hungwen, a cat-like sage who lives in a giant pyramid over a monument to those lost in the last battle.  And they learn that, though many of those who walk between the doors are friendly and good, there are others who are not.  The worst are the Shining Ones, beings determined to impose their own brand of peace and order upon the universe, and who use their ability to take on the forms of others to infiltrate other worlds and assimilate them into their collective by overpowering the minds of their victims.  The last war against the Shining Ones was years ago, but they are still out there, beyond the blocked-off reaches of the hall, waiting to rise again.  And that war reached even to the edges of Earth, for the people that preceded Cassie and her friends through the door fought in it, and the tragedy befell them looms over the unsuspecting trio as they continue to walk between the doors and explore their wonders.

The Doorway Beneath the Bed is the first in a continuing series meant for middle readers about the adventures of Cassie and her friends.  The second and third books, The Librarian’s Secret and The Gateway to the Old Ones, are also completed.

Preview The Doorway Beneath the Bed:

Doorway Beneath the Bed – Chapter 1

Doorway Beneath the Bed – Chapter 2

Doorway Beneath the Bed – Chapter 3

Doorway Beneath the Bed – Chapter 4

Doorway Beneath the Bed – Chapter 5

Doorway Beneath the Bed – Chapter 6